I'd like to welcome H. Terrell Griffin, author of 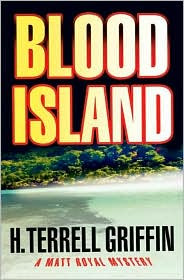 Blood Island, the latest book in the Matt Royal series. It's always a pleasure to welcome an author who sets his books in Florida, since I'm often familiar with the settings. In this case, it's the Florida Keys.

Before turning the blog over to the author, I'd like to mention there's a special one day contest for an autographed copy of Blood Island. Check the end of the blog for details. And, here's a sneak preview of the book, a quote from Griffin's website.

"What’s happening on this island will make your blood run cold. Matt Royal never has to look far for excitement. Excitement–and sometimes trouble–has a way of finding him first. But for this fun-loving lawyer turned beach bum, things are about to get serious. Dead serious.

When his ex-wife asks for help in tracking down her stepdaughter, last seen in Matt’s hometown of Longboat Key, Matt agrees to do a little searching.

But what looks like the case of one missing girl turns out to be something much bigger–and much more dangerous.

Enlisting the aid of his buddies Jock Algren and Logan Hamilton, Matt launches a full-speed-ahead search that leads from Longboat Key to Key West to an ominous strip of land called Blood Island.

But this is no island paradise. Blood Island is home base to a cult of religious zealots. And they’re making devastating plans that could change the world forever.

Writing mystery novels is, for me, a daily adventure, a time to flee from the mundane world of the retired lawyer into the exciting lives of my characters. When I sit down at my computer, I never know exactly where the story is going, so I am always a little surprised at the antics of those who people the narrative.

I don’t mean to say that I don’t have a general idea of where I want to take the action, but I continually find myself mystified at the direction in which the story flows. My wife says this is the result of a very sick mind, and maybe she’s right. Whatever the cause, it is a lot of fun.

Many writers use detailed outlines, setting up their novels chapter by chapter. Others wing it. I’m one of the latter, and I often wonder if this is a reaction to my many years as a trial lawyer.

A trial lawyer must be completely prepared when he enters the courtroom. He has to know the facts, the law and how those facts will be elicited from the witnesses. The courtroom takes on a reality of its own, circumscribed by the rules of evidence. For example, witnesses can only testify to what they know or saw, not what they heard. The lawyer must ensure that the testimony coming from the witness will work into his idea of the case.

At the same time, the lawyer has to make sure that the other side’s witnesses will not ruin his carefully constructed scenario. Therefore, he takes many depositions of all the witnesses, prepares to cross-examine these people at trial, and does his best to keep all these facts in his mind as he enters into battle.

In short, the trial lawyer spends many hours in preparation for every hour in the courtroom. After 38 years of this, I needed a break. Now my life meanders like a leaf in a stream, carried willy-nilly by an errant current. My writing is kind of that way. No plan, just good fun as I follow the characters through their adventures.

H. Terrell Griffin is giving away a signed copy of his book, Blood Island, to one lucky tour visitor. Go to Terry's book tour page, http://h-terrell-griffin.omnimystery.com, and enter your name, e-mail address, and this PIN, 1114, for your chance to win. Entries from Lesa's Book Critiques will be accepted until 12:00 Noon (PT) tomorrow. No purchase is required to enter or to win. The winner (first name only) will be announced on Terry's book tour page next week. Good luck!

Woo Hoo! I like this man's background (trial lawyer) and how he expressed himself. I sensed such a relief for him to be out of law and into writing - enjoying life on his fictional adventures. And, most of all, I love what his wife said! It made me grin. I entered the give-away, but still need to look into books 1 and 2 of the Matt Royal mysteries. Again, thanks for sharing Lesa.

You're welcome, Joy. Amazing how many lawyers would rather write, isn't it, Joy?

What a fascinating man! I love that he can write without the heavy weight of an outline. True creativity... Thanks for the giveaway - what fun!

You're welcome! And, good luck in the giveaway contest.

This book sounds really good! Thank you so much for the giveaway!
I've always been interested in anything to do with courtroom drama and I read a lot of books about it. I like to figure out who committed the crime before the end. lol Being a lawyer has to be a very interesting job even if it is stressful.
Carol M
mittens0831 AT aol.com

I'm telling stories out of school, but I have a sister who is a lawyer, and writes laws. Her specialities were roads, and now education. When I asked her a legal question once, she said all I know about that area of law I read in John Grisham!

I love John Grisham's books! I think I've read them all! Actually, I know what your sister means. I've learned a lot from his books and othrs about the legal system. I also love to watch movies and tv shows that deal with this subject. I find it so interesting.
Carol M
mittens0831 AT aol.com

Thanks, Carol! My husband is the same as you - he goes for the legal novels. I like the police aspect - I like detective and police procedurals. He reads the legal ones.

LOL You are so right, Lesa!

My name is Carol and I'm a book addict!

I recognize the signs. (grin)

I'm taking some time to visit all the other blogs on the tour - I've got my post up today! You received some great comments!

Thanks for stopping by Wendi. I just started following you!