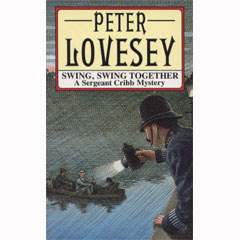 Peter Lovesey is still writing mysteries, but he discontinued his Cribb/Thackeray series thirty years ago. Despite the lack of new books in the series, I'm still fascinated by the series, and one title in particular, Swing, Swing Together.

The Cribb/Thackeray mysteries were published between 1970 and 1978. The eight book series were historical mysteries featuring Sergeant Richard Cribb and his long-suffering assistant, Constable Edward Thackeray. These Victorian mysteries featured different aspects of Victorian life in each book, with an emphasis on sports. Readers of Anne Perry's Charlotte and Thomas Pitt mysteries might appreciate these books with their rich historical details and background of class difficulties in England.

The emphasis on Victorian life made these books particularly fascinating. Wobble to Death was about an illegal marathon walking race. Waxwork, about a woman who confessed to a murder she didn't commit, won the 1978 Silver Dagger Award.

But, my favorite Cribb/Thackeray book is Swing, Swing Together. This book is connected with two other books, and that's part of the fascination for me. Here's the summary from Peter Lovesey's website. "After Jerome K Jerome’s Three Men in a Boat became a Victorian bestseller, rowing on the Thames was the great craze of 1889. The novel begins, however, with skinny-dipping (under another name) by some student teachers. By chance one of them finds herself a witness in a case of murder. The suspects? Three men in a boat.

When Cribb and Thackeray take to the river in pursuit, nobody will take them seriously. However, they stick doggedly to the trail, which leads upstream to Oxford."

So, Lovesey's characters are chasing three men in a boat, a situation made famous in another book. And, if anyone has read Connie Willis' time travel book, To Say Nothing of the Dog, they'll realize that her main character also encounters those three men. In Willis' book, Ned Henry is shuttling

between the 21st century and the 1940s, searching for a Victorian artifact. When another time traveler accidentally returns from Victorian England, bringing something with her, Ned must jump back to that era to try to make things right. He's sent back to 1889 to regroup, where he boats along the river, encountering three men in a boat.

If you love the Victorian era, and mysteries set in that period, check out Peter Lovesey's Cribb/Thackeray series. And, if you're intrigued by the literary connection between books, you'll want to pick up Three Men in a Boat, Swing, Swing Together, and To Say Nothing of the Dog. It's a perfect collection for Friday's "Forgotten" Books.

Peter Lovesey's website is www.peterlovesey.com
Posted by Lesa at 5:00 AM

Always loved him. Thanks, Lesa.

You're welcome, Patti! Thanks again for including me.

This is one of the first and best series of historical mysteries. My favourite is probably Waxwork, but they are all enjoyable.

I liked Waxwork, too, Martin. But, Swing, Swing Together was the first I read, so I'm a little biased. I didn't go wrong in picking it if you say it was one of the first and best!

One of my favourite authors!

Great, Kerrie! Then this series hasn't been forgotten, or, at least Lovesey hasn't!

I LOVE To Say Nothing of the Dog! Willis is SO good at writing about dogs, especially in Cyril, the bulldog in the story. The cat is great, too!

I loved this book, too. And, I liked the fact that is was all familiar to me after reading Three Men in a Boat and Swing, Swing Together.

Why does it not surprise me that you focused in on Cyril? (grin)

Wow, what I'd like to know is how did 1978 get to be 30 years ago? I just bumped up against my age! Yikes - I graduated from high school that year.

I find myself going back to read authors that I savored years ago, and re-reading their series' from the beginning. Comfort reads, perhaps?

I totally agree with you, Lisa. I graduated from high school in 1975. In 1980, I had my first job out of grad school, and PBS was showing the Cribb/Thackeray series on TV. That's how a library friend found the series, and told me about it. 1978 doesn't seem thirty years ago, does it?

I love that sentence you used - "I just bumped up against my age."