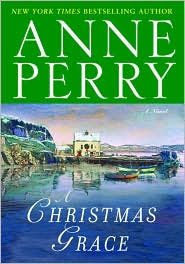 It's been a few years since I read one of Anne Perry's Charlotte and Thomas Pitt mysteries. It was a treat to return to their world, in the new book, A Christmas Grace, with a Christmas novel that features Charlotte's sister, Emily Radley.

Emily had planned a typical Victorian Christmas in 1895, and Perry opens the book with that beautiful setting. However, when a note arrives from her brother-in-law, Emily's husband encourages her to answer the request from an alienated family member. Emily's Aunt Susannah had been estranged from the family for ten years, when the widow married an Irish man, a Roman Catholic, and moved to his home in Connemara, on the west coast of Ireland. Now, Susannah is dying, at age fifty, and asks for family to be with her.

Despite her reluctance, Emily makes the difficult trip to Ireland, only to discover that her aunt is dying, along with the village where she lives. Everyone in the village seems to live under a threat, and the forthcoming storm terrifies them, to Emily's confusion. She finds herself caught up in the town's threats and secrets. A shipwreck, and a lone survivor, reveal truths that could threaten the village, or bring it a Christmas peace.

For readers of the Thomas and Charlotte Pitt mysteries, it's a treat to read more about Emily. But, anyone can read this book as a story of mysteries that grow until they poison an entire community, and destroy future hopes, dreams, and lives.