I'm now reviewing mysteries for Mystery News. It was an honor to be asked. 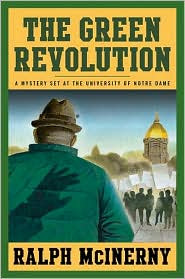 Ralph McInerny's The Green Revolution tells of the 2007 football season when it was a disaster for the University of Notre Dame, and no one was happy. At Notre Dame, where football had become a religion, some alumni started a website demanding that Coach Charlie Weis be fired. Faculty members started their own protest group, hoping the university would abandon football, and become a true research institution. Then there were the older professors, whose drinking club was scheduled to be razed soon. Even a few older clergy were unhappy with their loss of power at the school. It was a season of unrest at the university, and, this time, unrest would lead to murder.

Roger Knight, eccentric and philosophy professor at Notre Dame, and his brother, Phil, a private investigator, normally wouldn’t be involved in any of the unrest at the university. But Roger is such an agreeable person that his name ended up on a petition to drop football. It’s just amusing to him, but not so funny when a guest leaves a party at their house, and ends up dead on the golf course. When Phil is called in to assist with the investigation, in order to keep it quiet, he suspects murder. Who would want to kill the owner of the website encouraging the firing of the coach? Faculty, alumni, clergy, and, even Roger could be suspects.

If this all sounds confusing, it is. The book has amusing one-liners, but very little mystery. It’s stuffed full of characters, sub-plots, French and Latin phrases, and university politics. For college football fans, the book opened on a fascinating note with the picture of a college football day at Notre Dame. The book quickly descends into chaos, just as the political scene did at the university.

Roger Knight is an eccentric, interesting character. But, readers who have never read the series won’t learn much about Phil. In this mystery, they both seem to be bystanders to all of the events at the university. There are too many other characters involved in the story. By the end of the book, with the various protests and characters, the solution to the crime is almost anti-climatic. Most readers just won’t care what happens in this book.

Thank you, Corey! I was very pleased to be asked.