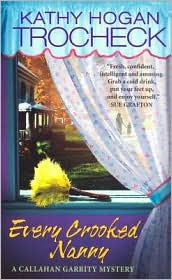 There was a time in the last century, when Mary Kay Andrews, who is now known for her books featuring two divorced women in Savannah, Georgia, wrote the Callahan Garrity mysteries under the name Kathy Hogan Trocheck.

Every Crooked Nanny was the first mystery featuring the woman who left the Atlanta Police Department to become a private detective, but ended up running House Mouse, a cleaning service. If you love an eccentric cast of characters, or appreciate the humor of Janet Evanovich, try Every Crooked Nanny. Poor Callahan is the straight man (really woman), to her mother, Edna Mae, a three-pack-a-day smoker with blue hair; Neva Jean, an excellent cleaner in a disastrous relationship, and two tiny black women, Sister and Baby Easterbrook. Put this oddball cast together, and they are soon in deep in a case involving a client's nineteen-year-old nanny who disappeared, along with her jewelry, silver, and real estate papers. Love triangles, crooked deals and scams, and dead bodies are par for the course for the House Mouse crew.

There were eight books in the Callahan Garrity series, beginning with Every Crooked Nanny, a mystery that was nominated for the Anthony and Macavity awards. Trocheck, who was a journalist, also wrote two books featuring Truman Kicklighter, a retired reporter, before she "became" Mary Kay Andrews and moved on. Even so, this earlier series featuring the House Mouse staff is worth checking out.

And, for other Friday "Forgotten" Books, check out Patti Abbott's website at www.pattinase.blogspot.com, where she summarizes all the suggestions for Friday.

Thanks, Lesa. Another author I've missed out on.

I have to say, Patti, I liked the Callahan Garrity mysteries better than any she's written as Mary Kay Andrews.