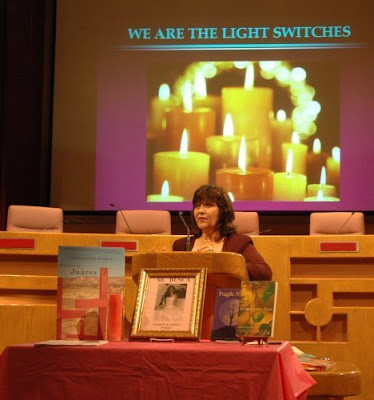 Stella Pope Duarte appeared as part of the Authors @ The Teague series at the Velma Teague Library in Glendale, Arizona to discuss her latest novel, If I Die in Juárez. Stella teaches Creative Writing at Arizona State University West. She also leads workshops and seminars on workshops and seminars related to educational and counseling issues, women's rights, writing, literacy, culture, Chicano/Chicana history, and storytelling.

Duarte first started writing in 1995 when her deceased father appeared to her in a dream. Since then, she's written a collection of short stories, Fragile Night, a novel called Let Their Spirits Dance, and, now, If I Die in Juárez, a powerful novel about the murders and disappearances of young women in Juárez, Mexico.

Why would Duarte write about such a tragic story? She's always been attracted to helplessness. She said we are always loved, and the families of the murdered and disappeared girls taught her that love doesn't end at the grave. Love is the greatest passion on earth. These young women and their families taught her that. 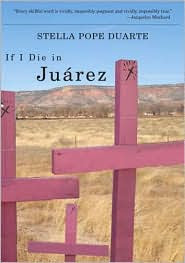 Family love gives Stella the strength to investigate these murders, and write her novel. Her parents were Francisco Moreno Duarte and Rosanna Pope Duarte. Stella said she was afraid when she read about the murders and mutilations, and didn't want to write the book. She got on her knees and prayed. The Spirit told her to go back there and finish the book. She understood that the people doing the murders should be afraid, not Stella.

Duarte went on to talk about archetypes and dreams. She said dreams have a lot of meaning. The dreamer can interpret their own dreams. She went back to the dream when her father appeared to her. She was a college professor, raising kids, and when her father appeared to her, it was right in front of her what she needed to do next. Her father came to her, and took her by the hand up a spiral staircase.

Stella came from a little barrio, la Sonorita Barrio in South Phoenix. She was a Chicana, born in the United States, with relatives in Mexico, and became a successful writer with a book published by HarperCollins. Duarte said we're all mestizos, of mixed race. Her Grandfather Pope was white. She said she found wisdom in her mother who said, "Every mind is its own world;" that we need to find a purpose on earth.

Stella Pope Duarte is a storyteller who mixes English and Spanish fluently in her presentations. She is such an outstanding storyteller that audiences can tell her meaning, even when they don't speak Spanish. She told stories from Mexican culture, and ended that part of her talk by saying, "In the end, all you take with you in love." What should you leave your children? Leave them your story. She said what attracts your attention is your passion, and you should follow it.

Stella followed her attraction, and passion, to the story of the young women of Juárez. She originally read about three young women, ages 16, 17, and 18 who were found naked, raped, tortured and killed. They were employed in an American owned factory in Juárez. Their murderers have never been found.

Duarte started this book in 2003. She had thought about it, after reading the story, but she mentioned in a class that she was going to write a story about the women in Juárez. When you say it aloud, it puts a thought on another level. It becomes a commitment.

Stella said readers shouldn't be afraid of the book, although the subject sounds gruesome. She said we would walk in the shoes of the girls, but would also triumph with the girls.

Stella Pope Duarte spent three and a half years of going back and forth to Juárez. The city, Mexico's fourth largest one, is now known as the "City of Murdered Women." The maquila industry grew after the NAFTA Agreement of 1992. Juárez became a Mecca for rural citizens seeking work in factories because the corn markets collapsed after NAFTA, and the farms failed. There are low wages in maquiladores, and most of factories are owned by Americans. Women earn $4.50 a day. It's a machismo culture, and men can treat women however they want. Now, women are training their boys to respect their sisters and mothers, to try to get past the machismo culture. However, society has given men permission to murder the women of Juárez.

The victims in Juárez are young women, ages 12 to 22. Over 550 women have been murdered, and there have been over 130 actual mutilations. Five thousand women have never been found. Sixty percent of the victims were maquiladores, factory workers, from poor, working families. Their bodies were dumped in the desert and empty lots. The brutality of these crimes are recorded as femicide, hatred against women. We cannot look away. There have been a number of suspects, from an Egyptian, to gangs, to bus drivers, to cartels. Duarte said she implicates the cartels in her books. The cartels are the untouchables, and right now there are cartel wars in Mexico. Diana Washington Valdez, the journalist who has covered the story the best, has a death contract on her from the cartels. 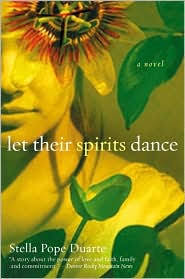 Let Their Spirits Dance is about a family traveling to the Vietnam Memorial, thirty years after the death of one of the sons of the family. Duarte is meeting with a producer about making that book into a film.

She repeated that she wrote If I Die in Juárez because she can't look away from helplessness. When you cross from El Paso to Juárez, you're greeted by crosses.
The search for bodies is always going on. There are protesters because women are angry. Mothers have been threatened if they ask too many questions. Fathers feel guilt because they couldn't protect their daughters. Investigators on both sides of the border are working on the crimes. They are more organized in forensics now because they're under pressure. And, anything that gives attention to the murders puts the city under pressure. They feel as if the world is watching them.

Sixty percent of the murders are girls from the factories, because they walk home, and they're vulnerable. The murderers prey on young women. They do the most harm they can. They want to inflict pain because they know the women have people who will cry for them.

Stella Pope Duarte is writing Women Who Live in Coffee Shops. It's about the shrine to a ghost that is behind the convention center in Tucson, the Wishing Shrine. The story is that the man was murdered because he fell in love with the wrong woman in the 1870s. And, she just won the Chicano Literary Award from UCLA.

Thank you to Stella Pope Duarte for bringing If I Die in Juárez to Authors @ The Teague.

All photos: Ed Sharpe Glendale Daily Planet http://wwww.glendaledailyplanet.com
Posted by Lesa at 5:00 AM