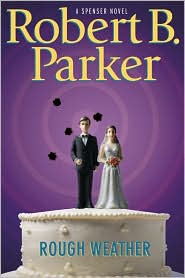 Rough Weather is the 36th Spenser novel by Robert B. Parker. I've read all thirty-six, plus eight of his other books. I have to admit I read the Spenser novels for the characters. However, Rough Weather has a more complicated plot than the last few books in the series. Even so, for those of us who like Spenser, it's still the detective and his friends that bring us back.

Spenser's latest client is Heidi Bradshaw, a woman who is famous for being famous. She's been married three times, each time to a wealthy man, and the most recent husband owns Tashtego Island. Heidi hires Spenser to attend her daughter's wedding. Although Spenser can't figure out his actual job, he and Susan Silverman attend. Before the wedding, they run into an old enemy, the Gray Man, who once tried to kill Spenser. They're both a little uneasy, not knowing why he's there, but neither of them expected gunmen to show up during the wedding, shooting the minister and the groom, kidnapping the bride in the middle of a storm with hurricane-like winds.

Rugar, the Gray Man, should have known better than to leave Spenser as a witness. Now, Spenser won't quit until he finds the truth behind the shootings and the kidnappings. And, no one should want Spenser and Hawk probing for the truth.

I LOVE Spenser...but I'm clear back at the beginning of the series...I've read the first six...thirty more to go! I feel a special kinship for this series because the Spenser series and I are the same age! Ha!

I also enjoy Sunny Randall. Parker is a talented writer in the crime fiction genre.

I have yet to read any of the Spenser books, but I LOVE Sunny Randall!! Isn't it time for a new installment?!

Oh, Jen. That's great! I asked about series a short time ago, and you have quite a series ahread of you.

Interesting, Les, that you and Jen both like the Sunny Randall series. Since I read the Spenser books first, I have a hard time getting into Sunny Randall. She just seems like a female Spenser, not as well done, to me.

I love Parker's use of words, though, and he does that well in any book he writes.

Sad to say, I haven't read any Parker books. :( It's so bizarre to have not read so many popular authors - what have I been reading?!?

OH! So "Sunny" is female. I think I would prefer Spenser.

Oops - I clicked published before I added that I am enjoying Chercover. :)

You're reading Chercover, Joy, another author who will be very popular when people catch on.

I prefer Spenser. Someday, you might get around to them, and you can tell us what you think.

36 books in a series! That's quite a commitment :)

It is quite a commitment. I don't think I've read 36 books by any other author.

Hey Lesa! (off the Parker topic) I just wanted you to know and to please tell Jim that my husband just finished Liars and Thieves by Coonts and he really enjoyed it! Thank you. :)

*I couldn't find the post where Jim recommended him and a couple other authors. ???

Thanks, Joy! It's never off topic to say a book was good. I'll pass it on. Jim is always quite smug after someone says they liked his recommendation. Thanks for passing on the comment, Joy!