Cancer Is a Bitch: (Or I'd Rather Be Having a Midlife Crisis) 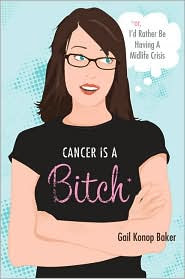 I lost three aunts to breast cancer. I have a cousin undergoing treatment right now. It's been a year since one of our library managers died of cancer. And, it takes more than one hand to count friends and acquaintances who have had breast cancer. Yes, Gail Konop Baker's memoir is right, Cancer Is a Bitch.

Baker is at times angry, melodramatic, triumphant, and funny. She deserves to be all of those things. She's sharing her story, and emotions, with other women who could go in for a mammogram, and discover there's a problem. She's one of us, married for over 19 years, mother of three, living in Wisconsin, with a husband who is a radiologist. Gail Konop Baker's memoir is messy and complicated. Which of us doesn't have a messy, complicated life?

Baker wanted to write novels, but, instead, found her voice to talk about her cancer. The book not only talks about her messy family life, but also her attempt to find her voice. The two elements are intertwined. Baker's parents were divorced; her brother committed suicide; she and her sister don't get together. She's had problems in her own marriage because she's never been comfortable in the role of doctor's wife. But what is her role in life? For years, it was mother. As her children grew, she hoped it would be writer. But, her novel about a woman with breast cancer was rejected at about the same time she discovered she, herself, had breast cancer.

Cancer Is a Bitch will not be a book for everyone. The title itself reveals that. The book stems from Baker's column called "Bare-Breasted Mama" where she "wrote about her fears, her pain, and her shock at being diagnosed with cancer." If nothing else, Baker gives women a voice that says, you can be angry, cry, hold your loved ones close, reject people who love you. Cancer is a messy disease that tears apart the victim, the victim's family, and loved ones. Cancer Is a Bitch.

Thanks for visiting my blog and telling me about this book.

You're welcome, Yasmin. You have a terrific blog. I subscribed to it. Thanks!

I reviewed this book and really liked it as well!

It was a good book, wasn't it? Thanks for the comment!

I doubt there is any woman over an "age" that doesn't know a half-dozen women who have had breast cancer. What a difficult thing it is.

And, I can only imagine the roller-coaster of emotions a woman goes through when she discovers she has breast cancer. Yes, it is a terrible thing that we haven't discovered a cure yet.

I don't know that we will ever find a one stop cure for cancer, because it is a very complicated disease.

But speaking as someone who has survived two different cancers in her lifetime, I am very thankful that medical science is so, so, so much better at detection and treatment than they were not that many years ago. Or I would be dead...lol

I will probably enjoy this book . . . someday. The subject is still too close to home right now. But thanks for letting us know about it.

I interview Gail on Wednesday on my blog. The book is almost as much about her marriage and relationships, the life she takes a second look at when she's diagnosed.

Yes, cancer is complicated. My cousin's type is one that is hard to screen for, and doesn't show up on mammograms.

I'm glad you're here with us.

Take care of yourself. Sometimes it isn't the right time for a book. The title alone spoke to me for this one. I agree with the sentiment.

Hi Lesa and other readers! I want to reiterate what Lesa said that the book equally if not more about marriage and motherhood and womanhood. And also funny (believe it or not!) and life-affirming! I have been touring around the country and reading to and meeting so many wonderful people (some touched by cancer, others not) and they all say the readings and book have made them laugh out loud and inspired them! To live more fully, more freely, to do the things they forgot to do and be their most amazing selves. Those are the underlying messages in the book. Those are the lessons I took away from this experience. So please don't be afraid to read a book with the word cancer (or bitch!) in the title. And after you read it, e-mail me and we'll chat.

Thanks for leaving a message for readers. I hope they read it, and answer you. And, I hope they come back for the interview on Wednesday. Wait until they see your picture. I'm sure they'll be able to tell you have a sense of humor. It's a terrific picture.

Stop back on Wednesday. Hopefully, you'll have comments.

Bitch in the title would be a plus in my book!

A BIG thing like a diagnosis with cancer can be a real turning point, yes even a positive one, in your life. It can really be a chance to see things in a new light, to take stock..and maybe make some changes you might not have had the courage to otherwise.

Caite! Yes! Exactly! Hope you read the book and nod in unison with my journey... let me know and we can chat about it!