Sunday Salon - Arizona - The Place to Be

Four years ago, Jim and I moved to Glendale, Arizona, after living in Florida for eighteen years. I loved my staff, and my library branch (which has since closed), and my other library friends. Other than that, there has never been anything I missed about Florida.

Arizona fits our lifestyle. And, our home in Glendale is located perfectly to get on the loop. We can be in downtown Phoenix in twenty minutes. I can be at The Poisoned Pen Bookstore in Scottsdale in forty minutes.

We've enjoyed some highlights during those four years. Jim took me for a hot 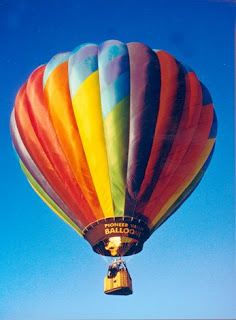 air balloon ride over the Sonoran Desert. What an unforgettable experience! We both love sports. We've seen the Phoenix Suns four or five times, including a playoff game. We've been to Diamondbacks games, including two in one weekend, when they played the Detroit Tigers. We've even been to PIR to a NASCAR race. And, when Ohio State was here for the Fiesta Bowl, we were part of the pep rally at Chase Field.

And, it hasn't all been sports. We've seen Tim McGraw and Faith Hill in concert. We loved the Harry Connick, Jr. concert. And, the Desert Botanical Garden at Christmastime is magical. We've been there twice.

All of these were special Arizona experiences. And, then there's the authors. In Florida, if I wanted to meet and hear authors, I usually had to wait for a festival, our Lee County Reading Festival, or the Sarasota Book Festival. At least since I chaired the Authors Programming, I could try to bring in authors I wanted to see.

Barack Obama when he was on his book tour. We met him, shook hands, and told him we hoped he ran for President.
And, The Poisoned Pen hosts so many terrific mystery writers, I could go over there almost every day, if I lived closer. My library programmer, Bette Sharpe, and I even started a program called Authors@The Teague to bring authors to the west side of the Valley. Barbara Peters, owner of The Poisoned Pen, and her staff, have been very generous in assisting us with the programming.

That brings me to this month. This afternoon, I'm off to The Poisoned Pen to see Alafair Burke, author of Angel's Tip, and S.M. Stirling, author of the new science fiction book, The Scourge of God.

I'm frantically trying to finish Margaret Coel's Blood Memory. She's appearing at the Mesquite Public Library on Monday, and I'm going there with another library manager. On Wednesday, we're hosting an Authors@The Teague Program. Jennifer Lee Carrell will talk about her suspense novel, Interred with Their Bones. On Sept. 15, Betty Webb will lead the discussion of The Maltese Falcon for The Big Read program at our library. On the 20th, we'll host four mystery authors from Tucson, Elizabeth Gunn, Susan Cummins Miller, J.M. Hayes, and Margaret Falk (J. Carson Black).

We have a full schedule of authors for our library programs until the end of the year. And, we're already booking them for next year. How about Vicki Delaney and Deborah Turrell Atkinson for March? And, I'm still pleasantly surprised that we'll probably host Laura Lippman in April.

I love our life in Arizona - authors, sports, concerts, my job. For me, Arizona is the place to be.
Posted by Lesa at 5:00 AM

Oh Lesa, I'm so envious! We do get the concerts here - I've seen Harry three times now (not counting my trip to NYC to see him on Broadway). But the authors don't seem to make it our way as much. Michael Koryta does - helps that his books are set in the Cleveland area, but as for meeting them, I'm mostly traveling. I was able to see Kathy Reichs up in Toledo, but whereas you're driving 40 minutes to see Alafair, I'm driving 2 1/2 hours later this month. The closest Robert Crais got to us was 5+ hours away. I so wish we had a store like the Poison Pen closer; I hear about all their wonderful events and wish I could just pop right out there...so glad you appreciate it!

I'm so envious, Lesa. Austin has a great independent bookstore, Book People, downtown and they bring in many authors. However, few of them are mystery writers and it is always uncomfortably packed. We used to have a mystery bookstore here, run by Elmer Grape. It's gone now though. Many authors get to Houston, but that's just too far away for me. I live and visit authors vicariously through the experiences that you share. Thanks for doing that!

Do you have any spare rooms?

That's why I'm so happy to be here in Arizona. We didn't have anything like this on the west coast of Florida, either. These indepedent mystery bookstores need to be patronized, and treasured.

I have to say, Kay, that Austin is a pretty special place, too. All you need is that indepedent mystery bookstore. And, one thing Austin has that Glendale doesn't. One of my best friends lives there.

I do have a spare room, if you don't mind four cats, and that Jim smokes. Not the place for anyone who has allergies.

Sounds wonderful! I love the name The Poisoned Pen. What a great name for a bookstore!

And, it's a terrific bookstore as well. It's not just a great name.

That's kind of odd, Clare, but it's OK. I like Alice Hoffman. That's one of her books I just couldn't get into, though.

This wasn't the right blog to say we moved one week before Hurricane Charlie hit. With Hurricane Ike out there, it brings back memories.

Love the pictures, and while I'm extremely jealous of the weather, I'm even more jealous of the cultural opportunities-- even though I'll admit I haven't heard of a single one of the authors you mentioned. I like mysteries too. Any out of the group of writers you mentioned that are in that genre, that you would recommend? And/or that you would recommend the bookstore in our own town (for which I just started working this past week part-time) should get?

How this strike you. They have all the pictures of every Author who has appeared there, and we know many of them.

Justareadingfool - If you read this, email me at lesa.holstine@gmail.com. Tell me where your bookstore is located. I can suggest a few authors, but I found that some of the authors that were popular in Florida aren't as popular here in Arizona. And, some of our Arizona authors aren't as well read in Florida. Yes, you should have Margaret Coel and Alafair Burke in your store. But, if you write me, I might be able to make some better suggestions.

Oh, it's so tempting, Lesa! However, I think our dog would chase your 4 cats out, you'd be upset (to say the least) and kick us out, then . . . we'd be homeless! I may just have to settle for experiencing it vicariously. Oh yeah, then there's that little M vs O issue. I don't even want to go there. :)

Yes, I would be upset if the dog chased the cat, and I'd really feel bad if you were homeless. Sorry, Joy!