S.M. Stirling at The Poisoned Pen 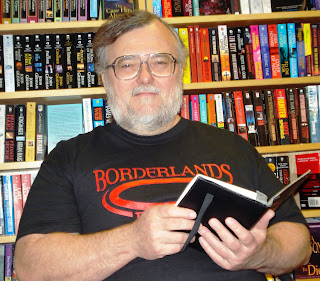 I'll apologize right up front, and say I was not familiar with science fiction author S.M. Stirling, and his series about the Change, "that brought magic back into the world and made electric and explosive power inoperative." Although he was very interesting, I know I didn't catch all of the references that appealed to his avid fans in the audience.

Barbara Peters introduced him as being from Santa Fe, the city her husband, Rob, refers to as "the city different." Stirling said, those weird pictures of sunsets? True. He lives in Santa Fe because he was writing full-time, and realized he could live anyplace. He was tired of living places where you didn't see the sun for four months, so he moved to Santa Fe.

Stirling is touring to promote his latest book, 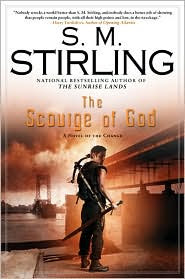 The Scourge of God. However, he said, since we were all going to buy that book and read it, he would read from the sequel, The Sword of the Lady. He had it on his Kindle to read. And, although it was funny, with fascinating characters, I know I missed allusions that other audience members picked up.

He was asked how much research went into how people changed after The Change. He said, a great deal. He consulted with physicists so the books would be internally consistent. Since he writes post-apocalyptic settings, Stirling doesn't have to pretend he knows what the world will look like in twenty years. Science fiction writers are not good at predicting the future.

He does use historical events because they are rich and surprising. There's the story of the three cigars during the Civil War. Before the battle of Antietam, Lee lost three cigar wrappers with his orders written on them. McClellan's only success, and it wasn't a great one, came because someone turned over those notes, and he actually had Lee's orders in hand. A writer couldn't make that up. But, they can use it.

Stirling said he'll stay in the same universe for another three books. He has other ideas after The Change series. He has written mysteries set in The Changed universe.

When he was asked how addictive is it to make up his own universe, he said it was fun. He doesn't want to get in a rut. Stirling said, "When you make it up, you're a god, and I'm a cruel god."

When asked why trilogies were so popular in fantasy, Stirling said, it goes back to Tolkien. He wrote his book as one book, and the publisher split it into three. But, the multi-book format works well for large casts. And, series sell well. Barbara mentioned there seems to be a trend toward huge, unwieldy books, such as Dennis Lehane's new one, and Diana Gabaldon's books. Stirling said science fiction used to be characterized by short books. When he was growing up in the 60s, 60,000 to 70,000 words were common for science fiction. But, word processors changed everything. Now it's easier to write longer books on the computer.

The audience was asked if they preferred a door stopper of a book, or wanted to wait for the next one in a series. Both types were favored. Stirling said he writes moderately long books, with sequels. He likes long books.

The problem with a continuing series is reintroducing the story arc without boring readers. Stirling said he's meditating on myth. The Change novels are a journey into myth. Modern history is a journey out of myth.

One reader asked if he made up history, because she became lost in the details in his book, Island in the Sea of Time. He said the readers suffered for his research. In a time travel novel set in the Bronze Age, you can make things up because people don't know much about that time. He took details from real history, and put too much in. You should read a book and enjoy it. You shouldn't feel as if you were studying for a final exam.

I enjoyed S.M. Stirling's quips and allusions. Even though I hadn't read his books before, his reading of The Sword of the Lady was a fascinating introduction to his writing, and his universe.