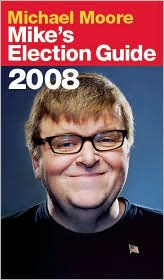 If you've read my blog long enough, you probably know my political and social views, even though I don't talk about them often. But, Michael Moore's book, Mike's Election Guide 2008, does an excellent job summing up my viewpoint. It's a political book, heavy on the satire and sarcasm, but based on facts.

According to Moore, "Republican" has replaced "liberal" as the dirtiest word in politics, thanks to George W. Bush and his political friends. However, he warns that the Democrats are professional losers, and, if we aren't careful, we'll throw away another election that Democrats should win. He says, "For years now, nearly every poll shows that the American people are right in sync with the platform of the Democratic party. They are pro-environment, pro-women's rights, pro-choice, they don't like war, they want the minimum wage raised, and they want a single-payer universal healthcare system. The American public agrees with the Republican party on only one major issue: they support the death penalty."

Moore's book says, if the Democrats don't blow it before November, they have the chance to take control of the Presidency, the House and the Senate. He even has a candidate guide for the House and Senate races in which Democrats have a chance to take a Republican seat. It's interesting reading, particularly when you can read how many Iraq War veterans are running as Democrats since they oppose the war.

Mike's Election Guide 2008 is a call to action for Democrats to follow through for a change, and not throw away an election. But, even if you totally disagree with his book, it does have one valuable section. One chapter offers proposals to get people to vote.

So, Democrat, Republican, or Independent. It's important that Americans exercise our right to vote. Please vote. Vote early, or vote in November, but, please vote.