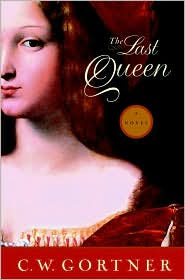 If you're an Anglophile, or enjoy biographies of queens, you undoubtedly know the story of Catherine of Aragon, Henry VIII's first wife. Catherine's sister was Juana of Castile, known in Spain as Juana la Loca. C.W. Gortner could have called his historical novel, The Last Queen, the lost queen or the forgotten queen. As he says in the outstanding commentary on his website, Juana of Castile, the last queen of Spain, is almost unknown outside of Spain.

It doesn't hurt to listen to his commentary before reading the book. It's well-done, sets the scene, and begins with the comment that history says she went mad with love, but history can be wrong. Gortner's story shows a woman with method behind her madness, a tragic, yet triumphant queen who never ruled Spain.

Juana of Castile, daughter of Isabella and Fernando was an Infanta of Spain. When she was thirteen, her parents conquered Granada, seizing it from the Moors, and uniting Spain. Her mother, who was actually the more powerful of her parents, sent her to Flanders to marry Philip, heir to the Hapsburg empire. There, she was a contented wife and mother. However, when her husband became greedy for power, and sought to unite his duchy with France, she refused to be a party to a union with Spain's enemy. As tragedy after tragedy befell her family, this young woman found herself on the path of destiny. Once she was named heir to her mother's throne, she would find herself pitted against the husband she once loved.

Gortner allows Juana to tell her story, looking back at her life. Her visit to her dying grandmother, who had been imprisoned for her madness, foreshadows the last years of her own life. For Juana, in pitting herself against her husband, and other men, became a target for the powerful men who wanted her throne. Her determination to save Spain led to her own downfall, but it kept the country intact for her son.

This book would be an excellent choice for book clubs, with its exploration of a life not really known in this country. It's as fast-paced and riveting as any thriller. The Last Queen is a beautifully written, well-researched story of an unknown queen. Gortner brings her to vivid life, as a lusty, strong-willed woman. Was Juana of Castile, Juana la Loca, really mad? Gortner says history isn't always kind to women. However, he gives voice to a strong woman, and allows her to proclaim her story.

Thank you, Lesa, for this marvelous review. I'm delighted to be here and will stop by to answer any reader questions and/or comments.

Thank you for a marvelous book! I'm going to booktalk it on Wednesday to a group of librarians from our entire system. I loved the book.

I really appreciate it! If there's anything I can do, please just let me know.

Thank you! I can't think of anything. But, I wish you the best. It's a wonderful book. And, I want to read your next book on Catherine de Medici.