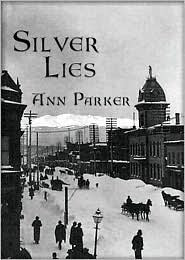 In Silver Lies, and the sequel, Iron Ties, Ann Parker takes readers back to a time period and location most of us are unfamiliar with. It's a shame more of us don't know about her historic mysteries, set in Leadville, Colorado in the 1870s.

Silver Lies introduces Inez Stannert, a saloon keeper whose husband has disappeared, and her business partner, Abe Jackson, who was a "Negro soldier in the Union Army." Inez' husband has disappeared, and she's running a successful saloon until a family friend ends up dead in the alley behind the Silver Queen. Parker uses the history of Leadville, a town that flourished during the silver strikes of the late 1870s, to tell her story.

The sequel, Iron Ties, is even more fascinating. The railroad is coming to Leadville, and it stirs up feelings that have been tapped down since the Civil War ended. Now, there are land grabs, shootings, and worries about the arrival of President Ulysses S. Grant. Once again, Inez is involved when the town erupts into lawlessness.

We may have read about Reconstruction in the South following the Civil War. How many readers know about the history of Colorado, and the West after the war? Ann Parker creates mysteries that are intriguing, entertaining, and educational at the same time. Don't forget Parker's Silver Lies, and the sequel, Iron Ties.

And, for other Friday "Forgotten" Books, check out Patti Abbott's website at www.pattinase.blogspot.com, where she summarizes all the suggestions for Friday.
Posted by Lesa at 5:00 AM

Another really great choice, Lesa. Although I haven't read this one yet, I do have it and the sequel here on my shelves. I have heard so many good things about these books. I love histoical mysteries (when I'm in the right frame of mind) and I love reading about Colorado (one of my favorite vacation spots). Thanks for the recommendation.

You find the coolest books. Thanks.

Thank you, Kay! I really like these books. The characters are unique, but I didn't really know anything about this time period in Colorado, and Parker does a wonderful job with it.

Thank you, Patti! I just don't think readers know these two books, and they're great.

Great choice! I've read Silver Lies and really enjoyed it. Iron Ties is waiting to be read. Ann Parker and I had an email discussion a few years ago about old mining towns. We both wanted to pack our bags and go visit each other's favorites.

Thanks, Cathy! I liked Iron Ties even more than Silver Lies. I hope you enjoy it!

Thanks for featuring this wonderful novel. I visited Leadville last summer and loved this amazing, historic and real mining town. Something memorable and unique which I will never forget.

You're welcome, Ruth. I hope they sell Ann Parker's mysteries in Leadville. She does a wonderful job in bringing the town to life.