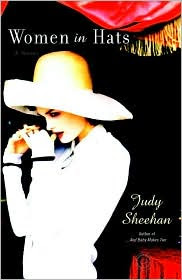 I really looked forward to reading Judy Sheehan’s novel, Women in Hats. The Cleveland Plain Dealer described her first book, …And Baby Makes Two, as “A gift from the writing gods.” This book was described as “a story full of humor, heart, and wisdom about the rich often fraught relationship between mothers and daughters.” Somehow, I missed all of that. It took me quite a long time to finish the book that I found depressing.

Bridie Hart never should have had children. She was a starlet who married and drank her way through her career, until she eventually had a smash television show. But, she did have two daughters, Lily and Leigh, with her third husband, Frank Majors, a producer. And, the two girls grew up in a disastrous household where drinking and fights were common.. Eventually, Lily died in a motorcycle accident, and Leigh married a dentist and produced small plays in New York.

It comes as a shock to Leigh when her husband gives her a play called “Women in Hats” for her birthday, one he wrote based on the story of his grandmother. It’s an even bigger shock when Bridie wants to star in it, and brings in a famous backer to raise money. Suddenly, Leigh has to cope with a miscarriage, her husband’s play, and her mother as an even bigger part of her life. Leigh, who has been resentful of her mother for years, isn’t ready to cope with all of the turmoil.

Women in Hats was a sad book about relationships, mother and daughter, husband and wife. Leigh might have been a success as a producer, but she’s a disaster as a person. She and Bridie are both self-centered, selfish women. Leigh is confused, and doesn’t know what or who she wants in life. As a story of a woman who couldn’t communicate with anyone, except through the drama she recognized from her childhood, this works. As a book that was supposed to be “full of humor, heart, and wisdom,” it fails.

Don’t make the same mistake I did in reading Women in Hats. It’s a story of a woman who eventually succeeds, despite her mother and herself. It’s not the story of a rich relationship that I was expecting. If you're not looking for a book with warmth and humor, you won't be disappointed.

Great review--sounds like one I won't be adding to my TBR pile.

Thank you. The book wasn't at all what I expected, or hoped for.