What could be better for a Sunday Salon that spending time with an author, and then offering a contest for a free book? Today, I have an interview with J. Scott 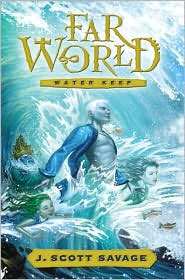 Savage, author of the young adult novel, Farworld: Water Keep, the first book in a projected five volume fantasy series. I hope readers enjoy meeting him. And, when the interview is over, I'll tell you about the contest for an autographed copy of the book.

Lesa - Thank you, Scott, for taking the time to do an interview. I know you're a little rushed right now. You're the first fantasy author to ever visit my blog. Before we get too far into the interview, would you tell us a little about yourself?

Scott - Let's see. I'm 28, 6'5", 210, single, incredibly handsome. Oh wait, that really is a fantasy. I'm actually 45 and the father of four children ages 8 to 20. I'e always been a big reader - to the point that I actually used to cut school to go to the library. (Which was great for my reading but didn't do much for my grades.) I've published four other regional books, but this is my first fantasy, young adult, and national novel. So, I'm pretty excited.

Lesa - What led you to writing, and, particularly fantasies?

Scott - I've always been a storyteller, but unlike a lot of other authors, I never dreamed of being a writer. I honestly never thought it was even possible. Authors aren't normal people. They were...authors. But once I wrote my first book, I realized it was something I'd always wanted to do. Fantasy came later. Again, I'd read it forever, but I didn't think I could write it. If the story hadn't pretty much forced its way onto paper, I never would have tried.

Lesa - Do you have favorite fantasy authors or books that influenced you?

Scott - Well, I grew up reading Tolkien, Brooks, and Donaldson. But even now, I find myself inspired by other authors I read, whether fantasy or other. I just finished reading Neverwhere by Neil Gaiman, and his imagination can't help but inspire. I also recently read the Percy Jackson series (Rick Riordan), and I love how Rick uses humor.

Lesa - Would you give us a summary of the book, Water Keep?

Scott - Well there is the back liner, but in my mind, Water Keep is the story of two kids finding the magic inside them. Marcus lives on Earth where he uses a wheelchair because of a severely crippled arm and leg. Kyja lives in a place called Farworld, where magic is everything. But she is immune to all kinds of magic. When the two of them finally meet each other, they discover a link that has been hidden for thirteen years. Together they must go in search of four groups of elementals that have the ability to create a door between their two worlds. This is the story of a couple of kids who discover who they are, but don't end up being the most powerful wizard or warrior. They don't magically overcome the trials they've lived with all their lives.

Lesa - Scott, since I live in Arizona, I was curious. Why did you use Arizona as the setting for Marcus' school?

Scott - Three of my favorite tools in writing a suspenseful novel are isolation, disorientation, and misdirection. Take a character from a familiar setting and move them to something unfamiliar. Since the part of Farworld we begin with is so lush and green, I liked the idea of beginning in a desert region. Also, Arizona works very well geographically as the story progresses.

Lesa - Water Keep is the first in a projected series of five in the Farworld series. What kind of hints can you give us for future books?

Scott - I've already heard some people saying that since clearly the first four books deal with finding each of the elementals, it loses some of the mystery of what will happen. But I think readers will be quite surprised by what happens. I especially like readers to go, "Wow, I never saw that coming." It doesn't happen as much in book one as it will in future books because you have to create the pillars of belief before you can yank them out.

Lesa - What do you enjoy most about your writing life?

Scott - I think the best part is writing something that affects a reader enough that even months or years after reading it, they still say, "That scene where x,y,z happens was so..." It might be a scene that scared them or made them laugh, or a character that they loved or were inspired by. But the fact that words on paper moved them as much as anything in real life is a thrill to any writer.

Lesa - And, Scott, this last question is one I always ask. I'm a public librarian. do you have any special memories or comments about libraries?

Scott - I was planning my release party. I knew it had to be in front of my little home town library. If there are superheroes in the world, they have to be librarians. And the children's librarians may be the most powerful of all.

Lesa - Thank you, Scott. It was nice of you to spend time answering the questions. And, thank you for offering an autographed copy of Farworld: Water Keep. I'll let you know the winner next Saturday so you can send their book.


Now, here are the details about the contest for Farworld: Water Keep. Unfortunately, you do have to be in the U.S. to win. J. Scott Savage will send an autographed book to one lucky winner. You get to pick the dedication.

If you'd like to win, email me at Email me!. If that link doesn't work for you, the email address is: lholstine@yahoo.com. Your subject line should read, Win Farworld. Your message should include your mailing address, and who you would like it dedicated to, if you're planning to keep it, or give it to another reader.

My husband, Jim, will pick the winner on Saturday, Aug. 30 at 6 a.m. PT, and I'll pass the information on to Scott. Don't forget - mailing address, and who the dedication is written to.

Good luck! And, thanks for spending a Sunday Salon with J. Scott Savage and me.
Posted by Lesa at 5:00 AM

Lesa, I have been wanting to read this book. Great interview. How fun for you. I just love the artwork on his cover too.

Thanks, Wisteria! I knew it was going to be a fun interview with Scott's response to the first question. Hope you enjoy the book!

Interesting interview and I would also also I don't aspire to be a author but enjoy learning about writing and perhaps helping writers with a critical eye
My Holiday from Hell and Books from Heaven post.

Thanks, John. Like you, I don't aspire to be an author, but it's always interesting to learn about writing.