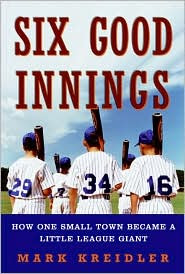 Anyone who was fascinated with those twelve and thirteen-year-old kids during the Little League World Series will be equally fascinated with Mark Kreidler's book, Six Good Innings: How One Small Town Became a Little League Giant. The book puts a spotlight on Toms River, New Jersey, in the same way that Friday Night Lights focused on high school football in Odessa, Texas.

Kreidler tells the compelling story of the town and its love affair with baseball. Baseball became the town's passion, first, because of successful high school teams during the 1980s. Then, in 1995, Mike Gaynor took his first Toms River East Little League team to Williamsport, PA, to the Little League World Series. And, Gaynor's teams were successful enough to go three teams in five years, winning it all in 1998. Suddenly, the world knew the New Jersey town as a "Little League Giant". According to Kreidler, Toms River, New Jersey became "A place where athletic excellence by sixth grade wasn't so much demanded as simply assumed, and both baseball smarts and outsized ambitions were a given."

In this book, Kreidler focuses on John Puleo's 2006 and 2007 teams, the coach himself, his family, and the boys and their families. The success of the boys and the team in 2006, when they sent to the State tournament, meant they were targets in 2007, the year they hoped to win and go to Williamsport. From the first day, when Puleo pulled out a picture of Williamsport, the team and families had their sights set on winning it all.

But, Kreidler does an excellent job pointing out that no one can count on success. After all, Little League is played by twelve and thirteen-year-olds. And, they have the pressure of an almost unreachable goal, one that Gaynor knew was a fluke when he made it to Williamsport with three teams. Kreidler brings the coach and the boys to life in Six Good Innings. He tells the story of their dreams, their successes, and the heartbreak. His book is the story of a town that pins its hopes on youngsters. At the same time, he shows that the parents care about their children. They aren't just pushing them toward an unreachable pinnacle. There is pressure on the town of Toms River, New Jersey. They surprised the world in the 1990s. Now, the sports world expects the teams from Toms River to routinely have that same success.

Six Good Innings is a book for everyone who understands the passion for sports, or wants to understand why an entire community supports a Little League Team. This isn't a book that tears down Toms River, New Jersey. It's a suspenseful book that explains how the Toms River passion came about, and how one coach and his team spent two years hoping to get to Williamsport. It's a big with heart, hope, and heartbreak. Six Good Innings demands to be read by anyone who wants to understand sports and the passion for winning.