The Rabbit and the Snowman 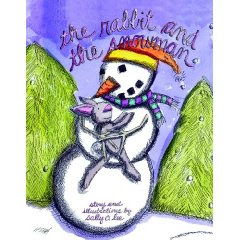 In a departure from my usual mysteries, I just finished Sally O. Lee's children's picture book, The Rabbit and the Snowman. The illustrations won't be for everyone, but the message of changing friendship is definitely for every reader.

Lee tells the story of a snowman, built by a group of children, and then abandoned as they went about their normal lives. He felt abandoned as well, and wondered what he might have done wrong. Why didn't they like him anymore? When a rabbit showed up, he had someone to talk with. He and the rabbit had lengthy conversations, sometimes including the birds in their friendship. When the snowman melted in spring, the rabbit wondered what he might have done wrong that his friend left him. Why wasn't the snowman there anymore? Spring turns into summer, then fall, and the snowman shows up again. Once again, the two friends are together.

The rabbit and the children are a little stylized for my taste, with pointed noses, and odd shapes. However, the snowman is gorgeous with the shading around his body. And, the frames around some of the words match the other illustrations. There are carrots, sticks, scarves, even pieces of coals. Those frames are one of the most attractive features of the book.

It's August. It might not be the best time of the year to discuss The Rabbit and the Snowman. But, teachers and parents looking for books about friendship might want to pick up the book now, and save it for a wintry day.