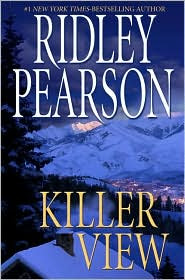 It feels like catching up with an old friend when Ridley Pearson brings back Blaine County Idaho Sheriff Walt Fleming. And, he's truly a loyal friend, as Killer View shows. It's also evident that no one should want to be on his enemy list.

In just one short week, Walt has to deal with a murder, two kidnappings, and government interference in his job. He's still dealing with the repercussions of his separation from his wife, and his guilt that he can't spend enough time with his daughters. What else can go wrong? How about an injured deputy, lying ranchers who impede his investigation, and the appearance of the Center for Disease Control in his county. Despite all of his problems, he still tries to help a teen and a local man who have both been in trouble in the past. He valiantly tries to keep everything under control, but it's overwhelming, even for Walt.

Pearson's technical details as to guns, hunting, and tracking can become a little too much. Those details slowed the story down at times, for me. However, when it comes to the climax of the book, no one writes one any better than Ridley Pearson. Killer View has a killer ending.