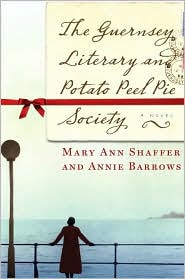 I love 84, Charing Cross Road by Helene Hanff. I've read it three or four times, and, when I watched the movie with Anne Bancroft and Anthony Hopkins, I was so caught up in it that I burned myself while I was ironing.

The Guernsey Literary and Potato Peel Pie Society is going to be this year's 84, Charing Cross Road. I predict this book will be the most popular book for book groups. Mary Ann Shaffer's book was finished by her niece, Annie Barrows, after her death. It's a shame that Shaffer isn't here to read the reviews. They're glowing.

In London, in 1946, author Juliet Ashton is looking for her next project after the war. Her letters to her publisher and her best friend describe her life, and her search for an idea. When she receives a charming letter from a resident of Guernsey, she's intrigued. Dawsey Adams writes that he owns a book by Charles Lamb that was once Juliet's, but it's his comments about a roast pig bringing about the start of The Guernsey Literary and Potato Peel Society that catches her attention. Before long, Juliet is corresponding with the residents of Guernsey, an island in the English Channel that was occupied by the Germans for five years during the war.

This marvelous epistolary novel reveals the horrors of the occupation, but also the kindnesses during the war. The shadow of Elizabeth McKenna hangs over the book, the wise young woman who is missing from the island, and whose story haunts the residents and Juliet. Readers will care deeply about the islanders and their stories, just as Juliet does.

Book clubs will snatch up this novel. It's a short, charming book, but it's meaty in discussion material. How many people knew about the German occupation of Guernsey, or, really, anything about the island? The story has history, discussions of books, wit, letters by over twenty characters, and two interesting heroines. There's romance, suspense, tears and laughter.

The Guernsey Literary and Potato Peel Society is a gem of a novel, one to treasure right along 84, Charing Cross Road.

I've already got this one on my TBR list, but ummm, I've never heard of 84, Charing Cross Road (Hanff). Should I be embarrassed? :) I'm going to look it up right now.

No, Joy, you don't need to be embarrased. It's a popular selection with book clubs, and it's just a classic book. But, there are so many books out there, how would you know all of them. I loved both books.

You're going to be hearing a lot more about it. It's reviewed in People today, and they loved it. I think the comment was "a small masterpiece."

I STRONGLY suggested this title to my bookclub and am hoping someone chooses it soon, as my month doesn't come around until next spring.

I think they need to pick it soon, or every other book club will beat them to it. I expect it's going to be a major pick.

With a review like that, how can I NOT add this to my TBR list!! Sounds fantastic!

"Smallworld" - Once you get around to reading it, I hope you come back and let me know what you thought. Thanks!

How many people knew about the German occupation of Guernsey, or, really, anything about the island? I sure didn't! I think that's one of the reasons I love the book as much as I did. I learned so much about the Occupation of Guernsey. Plus, like you, I loved 84, Charing Cross Road (book & movie), so this was a huge winner in my book. As I said in my review, it could very well be my #1 read of the year.

I agree with you. Unless something great comes out, it will be my #1 pick as well.

I read your review before reading the book, and, because I liked it, I've been following all the comments on your blog. Looks like you've built quite an audience for it!

I didn't have any idea that Guernsey was occupied by the Germans. That was one of the interesting aspects of the book.

The book was wonderful!

Loved your review. This book is captivating for the history, setting and story. I knew about the Guernsey occupation from my interest in this topic and the book by Elizabeth George, A Place of Hiding. I read any book about that era and the occupation.

Thank you, Pearl. I don't read Elizabeth George, so I didn't know about it. It was captivating, wasn't it?

I finished this book yesterday and all I can say is WOW! I loved it! Such a wonderful story and presented in my favorite format, letters. I will definitely be suggesting my afternoon book group put this on the list for next year. I wonder if we might do a couple of months of WWII fiction and pair this with TALLGRASS? What do you think? Two different perspectives? Or do you think TALLGRASS would be too bleak to pair with this?

Kay, you could always pair it with 84, Charing Cross Road!

I agree with Les. I'd pair it with 84, Charing Cross Road. However, I still think you need to do Tallgrass, and you know your group better than I do. It would make an interesting pairing for WWII books. I'm glad you loved it as much as Les and I did!

I've placed the Guersey Literary & Potato Peel Society on my wish list and suspect that I shall purcahse on my next Amazon order.

84 Charing Cross Road is a great film & book. There is a website here - http://www.84charingcrossroad.co.uk/

Actually I recommend lots of the Helene Hanff - Apple of my eye is another favourite.

Thank you! I'll have to check out Apple of My Eye.

Let me know what you think about this book when you get a chance to read it! I see it just made our local bestsellers list.

I read Apple of my eye back in 2006 as part of a Book Crossing bookring. You can read the journal entries at the following link
http://beta.www.bookcrossing.com/journal/4509164

Thank you! I'll check out the journal entries.

I'm currently reading 'The Guernsey Literary....' for my Book Group. I'm finding it a little slow at the moment but I've only just found out about Elizabeth's move by the Germans. I've got a week in which to finish it but keepi finding other books which I find keep me more interested in turning the pages. So far my thoughts on this book are that it an interesting story (the Guernsey under occupation aspect, that is)but told in a very gentle manner. I find Juliet's relationship letters quite distracting though.

My choice next month... not crime/mystery, but need something with a bit of bite - any suggestions are welcome!