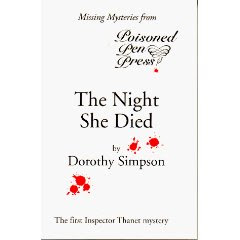 I worry about Dorothy Simpson's Luke Thanet series. Since she's not writing them anymore, and it has been over eight years since the last one, are readers going to remember her books? Dorothy Simpson's Luke Thanet series, beginning with the first one, The Night She Died, should be remembered. I'm picking her British police procedural series for my Friday's "Forgotten" books.

The jacket information for the introductory book says, "Detective Inspector Luke Thanet likes everything about his job - except for looking at the body. And tonight, the body he's faced with is particularly upsetting, for it's that of a pretty, young woman, lying by her front door with a kitchen knife stuck in her chest." Thanet's cases are never as straightforward as they seem. He takes his time at a crime scene, since he likes to feel his way into a case, and not rush into them. The reader knows that Thanet cares about every victim. We can tell how much he cares.

And, Luke Thanet cares about his family, as much as he does his cases. The Luke Thanet books have a special touch that readers cherish, and, when the series ended, we missed following his wife, Joan, and his children, Bridget and Ben, as much as we did the mysteries themselves. In the course of the series, Joan changes, and the children grow up. Many readers missed this family, and feel as if we never found out how their lives turned out.

Simpson's mysteries are complicated stories about relationships. As Thanet unravels the puzzles, he also reveals more about his own life. Anyone who enjoys the traditional British mystery, and hasn't read Dorothy Simpson's books, has missed a wonderful series. Luke Thanet is not a simple policeman. Readers appreciate his work alongside Detective Sergeant Mike Lineham, as the two solve complex murder cases. We also appreciate the complications of daily life in Dorothy Simpson's books.

And, for other Friday "Forgotten" Books, check out Patti Abbott's website at www.pattinase.blogspot.com, where she summarizes all the suggestions for Friday.
Posted by Lesa at 5:00 AM

Wonderful books that deserve to be reread and remembered.

I have not read these but I will take your advice and add this one to my list. Thanks for the recommendation!

Oh my...another one for my ever-growing TBR pile! :) Thanks, Lesa!

Kay, I think you'll like this series. Definitely one to check out.

That's exactly what I thought when I picked up the first one again. Very special books.

If your TBR pile is as bad as mine, it will be a while until you get to it. But, when you do, you'll be glad you found them in the pile.

Thanks for the head's up, Lesa. I love Patti's idea of a "Forgotten Books Friday" - so many books to rediscover.

Yes, isn't that a great idea? I end every Friday by going back to Patti's blog to see what books or authors other people selected.

Thank you for the heads up on this series. I had to start with Six Feet Under, because we don't have the first one, but I really enjoyed this.

The forgotten books on Friday are a great idea.

You're welcome! I love this series, so I'm glad you picked one up. Thanks!