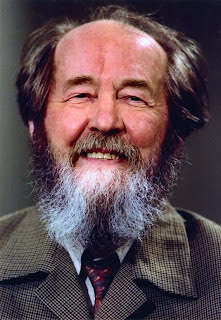 The best way to describe this is through the press release from the Russian press.

The Nobel laureate and former dissident died of heart failure at 11:45 pm (1945 GMT), the writer's son said, according to the agency.

Solzhenitsyn won the Nobel Prize for literature in 1970 after writing harrowing works about the Soviet Union's system of labour camps. He was expelled from the Soviet Union in 1974, thereby becoming Cold War icon.

He wrote about life in the Gulag with harrowing detail in his most celebrated works: "One Day In The Life of Ivan Denisovich", "The First Circle" and "The Gulag Archipelago"."


There was a lengthy article, and I'm sure there will be a great deal in the NY Times and other newspapers tomorrow, but with such a great loss to the world, I wanted to mention it here.
Posted by Lesa at 5:01 PM