How Dolly Parton Saved My Life: A Novel of the Jelly Jar Sisterhood 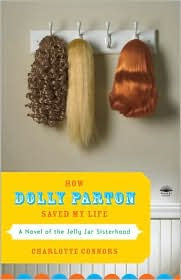 I'm a sucker for books about a group of women, and their friendship. Charlotte Connors introduces us to four women in How Dolly Parton Saved My Life: A Novel of the Jelly Jar Sisterhood. These are four women with very little in common when the book starts. It's fun to watch them come together.

Each of the four women has a chance to tell her story, beginning with Josephine (Jo) Vann. Jo is the Junior League wife, mother of two. It's her idea to start a company that caters to her friends. She wants to build a catering business made up of successful, independent women who put families first.

Jo reluctantly takes on a partner, Ellie Howell-Routledge, the wealthy daughter of an African American power family in Atlanta. Ellie, who has twins, thinks Jo is just a little stiff, and doesn't know the real reason for Jo's reluctance to work with her.

Daisy, a single mother, is a renowned pastry chef. She was a teenage mother, and has a math whiz teenage daughter. She's also the one whose role model is Dolly Parton, an independent woman who charges through life with gusto.

And, Cate, who has recently broken up with her boyfriend of eight years, brings her background in interior desing into the company. She'll handle bookings, themes, and decorations.

How Dolly Parton Saved My Life is a little superficial, and doesn't go into as much detail as most readers would like. In fact, Jo and Ellie, who, as owners of the business, should be the primary characters, are not developed as well as they should be, and their motivations are not always evident. Ellie and her feelings seem to be glossed over at times. Daisy is the saving grace of the entire story. She brings the women together, and she shines as a character. More than any other, it's Daisy I'd like to see more of in any future Jelly Jar Sisterhood novels.

It's an enjoyable book, but with better character development, How Dolly Parton Saved My Life, could be a much stronger book.

I like the way this one sounds and think the cover is great. What is with the missing hair on the 3rd hook? Or is it missing? Guess I'll have to look this one up.

I've been enjoying Chris Grabenstein's Ceepak/Boyle books. Have read the first two and am eagerly awaiting arrival of the next two at my house.

I'll answer you honestly, Kay. Even after reading the book, I have no idea why one of the hairpieces is missing. It is a great cover, isn't it.

The cover photo is by Tamara Staples. I actually just came from her site, where the sheer coolness of the cover sent me Googling in search of a review.

Thanks, Agness, for the link! I love that picture. The cover artists and photographers do a wonderful job on some of these books that just reach out and grab you.

I love the book title, reason enough to pick up the book. :-D