It was a good month for mysteries, but the best book I read during June was not a mystery. It was Sarah Addison Allen's The Sugar Queen. 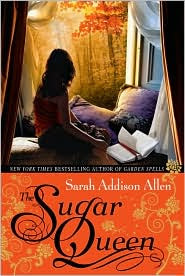 And, at that, her book, Garden Spells, is even better.

Here's the list of the books I read during June.

The Sugar Queen by Sarah Addison Allen - A wealthy, lonely young woman finds a woman living in her closet who knows her secrets, and changes her life.

Sacrifice by S.J. Bolton - Tora Hamilton finds a body on her property, and the surgeon is so angry that she pushes herself into the investigation in the Shetland Islands, an investigation that disrupts the hospital where Tora works, and the community.

The Crossroads by Chris Grabenstein - Juvenile suspense novel/ghost story about a town haunted at a crossroads, and the boy and his stepmother who confront the ghosts.

I Shall Not Want by Julia Spencer-Fleming - Rev. Clare Fergusson and Russ Van Alstyne deal with migrant farmworkers, dead bodies, and the fallout from their relationship.

The Blood Detective by Dan Waddell - In a debut mystery, a genealogist in London helps the police in the search for a killer who is reenacting murders.

How to Survive in the Real World: Life After Graduation, ed. by Andrea Syrtash. Survival guide of advice from hundreds of people.

A Share in Death by Deborah Crombie - First Duncan Kincaid/Gemma James mystery in which Duncan's vacation at a timeshare is interrupted by murder.

Mercy Street by Mariah Stewart - An ex-cop is hired by a reclusive billionaire to search for two missing teens who witnessed a shooting.

The Vanished by Bill Pronzini - The Nameless Detective is hired by a woman whose fiancé disappeared after getting out of the army.

Fearless Fourteen by Janet Evanovich - Stephanie Plum and Morelli take in a teen whose mother was kidnapped so her brother would disclose the location of stolen money - $9 million.

Rubicon by Lawrence Alexander - Political suspense in which a senator uncovers a plot to take over the country during an election year.

Writing in an Age of Silence by Sara Paretsky - Collection of essays about finding a voice. One essay is about the voice at a time when the government is trying to silence voices.

All Shall Be Well by Deborah Crombie - When Kincaid's neighbor dies, he suspects murder, even though she had cancer and discussed suicide.

A Reunion to Die For by Lauren Carr - Joshua Thornton returns to his West Virginia hometown as a prosecutor, and has to reopen the twenty-year-old case of the death of a former classmate, along with the murderous fallout.
Posted by Lesa at 5:00 AM

I'm about 2/3 of the way through Garden Spells for the Southern Reading Book Challenge. I'm really enjoying it also! I should finish it tonight.

I'm glad you like it, Lori. I know a few people who were disappointed, but I thought it was almost as good as Garden Spells. And, I loved Garden Spells!

Lesa, Sorry I couldn't attend the author speak at your library today. I had to help out in a family emergency. I would have loved to meet you face to face as well as listen!! I won't be deterred! I'll try again another time!
Gaye

And, I'd love to meet you sometime. Our August program features an author of a book about Marty Robbins. But, our Saturday, Sept. 20 program will be four mystery writers from Tucson. It should be a good one! It will be at 2 p.m. on that day.