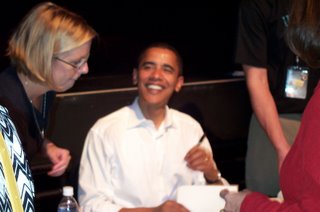 Jim and I went to the Orpheum Theatre last night to hear Illinois Senator Barack Obama talk about his book, The Audacity of Hope. Changing Hands Bookstore sponsored him, and the theatre was sold out before last Friday. Jim was smart enough to suggest we go very early, even though he wasn't speaking until 7 pm. When we arrived in downtown Phoenix, there was already a line at 5 o'clock. We met a very nice couple in line, Eldrin and Caroline, who had been to the Democratic rally in Tempe earlier in the day. He was a retired government teacher, and we had a lot to talk about while we waited for two hours.

It was worth waiting. Phoenix Mayor Phil Gordon spoke a little about Barack Obama, but he was actually introducing the governor. Governor Janet Napolitano talked about some of the material in Obama's book before she introduced him. Senator Obama came out to a standing ovation. He said he was very pleased that the governor had read his book. "As you know, not all politicians read." The audience was very appreciative of Obama's allusion. He talked about the fact that the American people have much more in common than divisive politics would lead us to believe. And, the comment I appreciated the most was his emphasis on "The essential decency of the American people." He did not discuss the current hot news item, whether or not he will run for President.

After he spoke for about 45 minutes, Senator Obama signed his books. A politician is very fortunate if he's left-handed. He was able to sign books, and also reach out and shake hands. He spoke to each person, asked me my name, and thanked us for coming. He was very personable and charismatic. I'll be interested in reading his book, The Audacity of Hope.

I wanted to thank my husband, Jim Holstine, for the picture of Senator Obama.

Thanks for sharing.I found a lot of interesting information here. A really good post, very thankful and hopeful that you will write many more posts like this one.
https://kodi.software/
https://plex.software/
https://luckypatcher.pro/