Lee Child At The Poisoned Pen 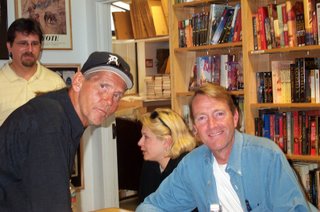 Saturday, my husband, Jim, and I went to The Poisoned Pen in Scottsdale to see Lee Child and Cornelia Read. Jim was surprised when Lee Child started speaking to find out he was British. I kidded him and told him he didn't read the back flap. Jim has never liked British authors, and refuses to read them. In fact, he's always told people that I tricked him into reading what he now calls his all time favorite book, Not a Penny More, Not a Penny Less by Jeffrey Archer. So, he was surprised to find out Child was British. But, he and Child both said he doesn't write "British." In fact, in his current book, he takes Jack Reacher to England, and writes as if he were a stranger to England. Child kidded and said he wished he were.

Child is not only good looking, but has a great sense of humor and is a very good speaker. He said he's never going to write a standalone because readers start to count on a series character. He talked about discovering Cornelia Read when he was teaching at a conference, and had to read three manuscripts. Hers was the third, and the only good one. He recommended that she submit it. When I emailed Louise Ure, she said she recommended Cornelia submit it to her publisher, which is why she's thanked in the acknowledgments.

Jim asked Lee Child whether he had experience in Special Ops, and he said, no, he read a lot, and wrote from that knowledge. Jim had me ask how he captures the loner character, and Child said Reacher is him, and he's a loner.

I felt sorry for Cornelia. She was very good, but really a warm-up act for Lee Child. He had suggested she tour with him to give her exposure. It does that, but I still felt bad when 60-70 people were lined up to get his autograph and only a few for her. She was a very good speaker, a natural at presentation with her sense of humor. I'm sure this will help expose her to mystery readers.

We waited in line so Jim could meet him, and he asked him about being a Yankees fan. Since Jim was wearing a Detroit hat, the two talked baseball for a few minutes. I told him I was going to Thrillerfest, and that I'd recommended a "hole-in-the-wall" Mexican restaurant to Louise. He said he'd let me know how it was, and if it wasn't any good, he'd have to hunt me down and kill me.

The picture is great, but I think Jim is just as good-looking as Lee!

How great to read your take on it all, Lesa!

Hanging out with Lee at these things is definitely a bit like being the opening band for the Beatles, but it's still a lot of fun and he's wonderful to bring me along!

The nice part about not having as many people in line is that I get to talk more with buddies who are kind enough to turn out for the signings, too.