Kris Radish's third novel was a wonderful book. It moved me to laughter and to tears. It starts you right out on an emotional journey from the first chapter when Katherine is upset about her favorite bra. You laugh until she receives the ashes of her lifelong best friend, Annie G. Freeman, along with instructions for Annie's funeral. Annie's group of five special women friends are requested to take her ashes in her red tennis shoes on a traveling funeral to Santa Fe, Key West, New York City, Duluth and a small island off Seattle. Each woman is introduced via her relationship to Annie's life. Throughout the book, the reader will laugh and cry with them as they discover more about Annie and themselves.

This is a beautiful book for any woman over the age of 40. I think you have had to experienced love and loss in order to appreciate the story, and the true value of female friendship.

The dedication itself is worth quoting. "This book, which some might think is about dying, is really about living. It is for any woman - every woman - who has ever lost something or someone she loved and then grieved, touched the sorrowful edges of her own soul, embraced the heart of loss - and then moved forward."

Walter Satterthwait's latest thriller will make female readers take second looks at their grocery cart. In St. Anselm, FL, a small gulf coast city, a serial killer is attacking morbidly obese women, with the intention of bringing them to "perfection." Detective Sophia Tegaskis and her partner, Sgt. James Fallon catch the case. These are two fascinating people themselves. Tegaskis is a large woman from a Greek family who is haunted by the first victim. Fallon has his own demons to fight. Together they battle departmental politics, an FBI profiler and a hurricane in their desperate attempt to stop the killer. Satterthwait has written a compelling story with a punch of an ending.

My favorite line - Detective Tegaskis - "God was capable of forgiveness, maybe. But God was in a different line of work."

Personal note - On page 28, at a press conference, "Sophia recognized Jean Heller, from The St. Petersburg Times." Jean Heller, who wrote one of Jim's favorite books, did the Lee County Reading Festival for me in the first year. She and Jim had a wonderful time talking books at the author's reception. It was great to see her recognized in the book.
Posted by Lesa at 5:45 PM No comments:

What can you say about a book with sentences such as "Home isn't a place as much as a cellular memory, a collaboration of experiences that trail out behind you." Phillip DePoy's third Fever Devilin mystery is lyrical and haunting. Devilin, a professor and folklorist returned home to Blue Mountain in the Appalachians two years earlier. His complicated relationship with his girlfriend is further complicated when her teenage nieces die when their car is stalled on railroad tracks and hit by a train. She urges him to investigate, despite the fact that his best friend, the sheriff, is somehow involved and orders him to quit. Devilin's own background, as the son of carnies, as well as a folklorist, torments him as he searches for a wandering minister, and works with one of the "little people."

I can't resist one of the other sentences from this intriguing book. "A guilty man will contort his body to accomodate the thorns that grow on his soul until he's hobbled and bent."
Posted by Lesa at 11:41 AM No comments: 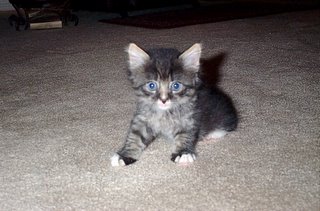 This is Nikki, the kitten that Nikkis World was named after. She's a true book cat, dropped off in a box at the library when she was only five weeks old.
Posted by Lesa at 1:40 PM 1 comment:

A number of writers have done the "book club" novel lately, but Gloria Goldreich did a better job than most. Each of her six women characters had been lonely little girl readers, "intense readers in search of endings." Literature was their shared passion. The books they discussed, Anna Karenina, Madame Bovary, even Little Women, were actually attempts to find answers to their own lives. There are meaty discussions of each book and author in this book, material which could actually be used by book discussion groups. This is the besst "book club" book I've read since Angry Housewives Eating Bon Bons by Lorna Landvik. That one spanned years, this one just one year. But in both books, the reader can see the changes in the lives of the characters, the changes influenced by their reading.
Posted by Lesa at 12:42 PM 1 comment:

As much as I wanted to like Wendy Howell Mills' new mystery, Island Intrigue, it just wasn't as good as her previous ones. Her earlier mysteries, Callie and the Dealer and a Dog Named Jake, and Death of a Mermaid, were both set in the Outer Banks. Mills brought those mysteries and the setting to life. Her new one is set on the imaginary Comico Island, and it, and her main character, Sabrina Dunsweeney, never come to life. Mills tries to pack the island with too many eccentric characters that include the stereotypical town storyteller, town drunk, small town lawman. There's a feud that's been separting families for generations. Sabrina herself is eccentric. She's lost an overbearing mother, and suffered through the removal of a tumor that she named Mr. Phil. She's determined to try a new personality, and she tries dressing in bright colors, driving a red car, and chatting up the natives. At the end, she's risen above her strange ways to become the all-wise woman who solves the mystery. It just doesn't work.

I feel bad when I have to say something like that about a book by an author I know and like. Wendy lives on Pine Island in Florida. I had read her two Outer Banks mysteries before she moved there, and then I invited her to appear at the Lee County Reading Festival. She is very nice, and it's not easy to say a nice person's work didn't work out for you.
Posted by Lesa at 4:09 PM No comments:

January was a pretty good month. I read 14 books, which I've summarized here.

2. Warrior in the Shadows by Marcus Wynne - A former CIA agent has to find a killer from Australia who draws on Aboriginal magic.

3. Size 12 is Not Fat by Meg Cabot - First Heather Wells mysery in which the former pop star becomes assistant director of a NYC dorm where students are dying in elevator "accidents."

4. A View from the Roof - Lessons for Life & Business by Calvin Mackie, PhD - Lessons his father taught him carried over into life.

5. Speak of the Devil by Richard Hawke - First Fritz Malone mystery in which the PI witnesses a sniper at the Macy's Parade, and becomes involved with a NYPD investigation.

6. Broken Windows, Broken Business by Michael Levine - Business success or failure based on appearance and perception.

7. Feint of Art by Hailey Lind - Debut Annie Kincaid mystery in which the owner of a Faux Arts Studio becomes involved in forgery and murder.

8. Our Endangered Values by Jimmy Carter - America's moral crisis as caused by fundamentalism.

9. The Trials and Triumphs of Sarah Lee Borders - Kenneth A. LIlly - In a small Kentucky town, an old man tells a stranger the story behind the town square statue.

10. Dark Side of the Moon by J. Carson Black - AZ Dept. of Public Safety Detective Laura Cardinal investigates the murder of two young people, which leads to other crimes.

11. The Cat Who Dropped a Bombshell by Lilian Jackson Braun - Pickax City celebrates its 150th anniversary, and Koko predicts a murder.

12. Teacher Man by Frank McCourt - The Pulitzer-prize winning author's career as a teacher.

13. Sex and the Seasoned Woman by Gail Sheehy - Pursuing a passionate life after 50.

14. Who Gets the Apartment? by Steven Rigolosi - Four people are rented the same apartment by a con man, with four possible endings to the story.
Posted by Lesa at 3:27 PM No comments: